Last month I travelled to visit with my daughter and son-in-law in North Carolina which was a lot of fun, wish I could have stayed longer.

It was only for a few days so I brought only two projects to work on. A baby blanket and the second Bayerische sock.
On the way there on the plane I put a ball of yarn in the seat back in front of me and naturally walked off the plane without it so I couldn't work any more on that project. When I picked up the Bayerische sock I remember too late that one of the needles had broken, since I forgot about that I hadn't brought any extra needles in that size.
Now I was project-less.

Not to worry - daughter took me to three local yarn shops. At one I bought a skein of Malabrigo sock yarn which the shop owner wound for me and I was back in business. By the time I got home I had almost finished the first Pomotamus sock. I really like the Malabrigo sock yarn - very nice to work with and the colorway is pretty too.

My daughter learned to crochet within the past year and likes to do amigurumi.
She designed and worked this dragon up herself - isn't it adorable?

For Mother's Day she made this sheep for me - it is just too cute.....

A few weeks ago I started a pink baby sweater with this pattern from Garnstudio......just as I was closing in on finishing the sweater my daughter and son-in-law called to let us know that we'd become grandparents next January - yay! Double yay for someone to wear the sweater (ok, I know it could be a boy, I'll just have to make a blue sweater too).

My fuschia beaded Rona shawl at 56" diameter was just too small, no way around it except to frog back and add more rows before the edging. I still had almost a full skein of yarn left. 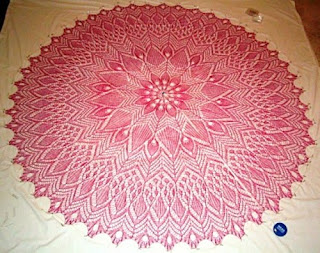 It took several weeks and lots of playing in Excel to figure out how to enlarge this shawl.

Finally it dawned on me that what I needed to do was increase until there was a multiple of 16 (the repeat for the edging) and then do the edging. The original pattern has 48 sets of 16 sts at the start of the edging. The edging on the first version was really tight so it seemed to me that there needed to be a lot more stitches allowing for increasing the diameter. I decided to work a simple stitch pattern with increases until there were 96 sets of 16 stitches and then work the edging. This would add about 20 additional rounds.

That went fine for a while and then it became apparent that with twice as many stitches I would soon run out of yarn. So I reworked my spreadsheet eliminating several rounds in the edging pattern but keeping the 'integrity' with the quintuple yarnovers in the edging design.

That decision made it also became apparent that I would soon run out of beads. Back to LadyBug Beads for a third tube of fuschia beads. Surely that would be enough, wouldn't it?

As I neared the end it seemed there were barely enough beads to finish. Now I had to go fishing down the side of the sofa for whatever beads I could find there (plus three dpn's and assorted crumbs and dust), then my son moved the sofa so I could hunt down more beads that were hiding in the carpet.

Just when I was thisclose to adding the final beads things got a bit hairy. First I accidentally knocked over the container of beads and they went hither and yon across the floor and I had to gather them all up again! Then as I neared the very end I could see I'd be short about a half dozen beads. There had to be more of those little buggers in the carpet. With Ott Lite in hand I went behind the sofa to hunt down more escapees. It's close quarters between the sofa and the bay window and when I stood up I stepped down on the plastic vent cover which shattered on impact. While picking up pieces of the vent cover I noticed red stains on the carpet and thought one of my dogs must have bled on it until it dawned on me it wasn't the dogs - duh - my toe was dripping blood - I had sliced it on the vent cover!

Could anything else go wrong? I so wanted to get this shawl done and over with.

Finally I began the crochet bind off which was taking about 5 minutes for each repeat even when I didn't accidentally drop a stitch or two and have to take time to recover the stitches, that meant it would take about 8 hours just to bind off! Not only that - the yarn supply was getting suspiciously low.

In the end there were two beads left and several yards of yarn - whew! I decided I had better carefully check if there were any dropped stitches at the bind off before blocking the shawl. Good thing I tugged on it all the way around not once but twice and found a couple dropped stitches the first time around and a few more the second time around. Quickly repaired those with a length of yarn at each occurrence and then spent a couple hours blocking.

I am pleased to say that this Rona Shawl is finished for the second and last time...........it now measures 60" across, only a few more inches than before but the extra stitches made all the difference. 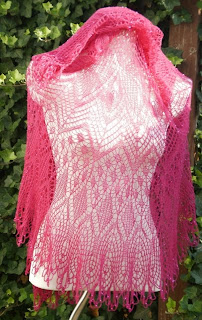 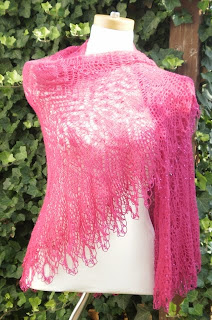 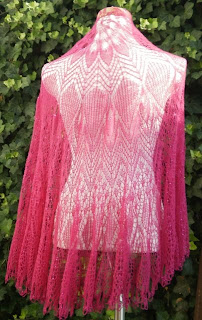